The lifetime of triplet state of molecular materials is generally shorter than 1 ms at room-temperature (RT) because nonradiative deactivation of the triplet state is usually rapid at RT.

However, if the fast nonradiative deactivation from the triplet state is largely suppressed, triplet excitons with a very long lifetime at RT can form. Molecular materials with the long exciton lifetimes could potentially lead to the realization of new applications that are unfeasible using conventional molecular materials with short exciton lifetimes.

Shuzo Hirata and colleagues at the University of Electro-Communications, Tokyo, have proposed novel molecular materials with triplet excitons with lifetimes of longer than 1 s at RT, i.e., ultralong-lived RT triplet excitons.

The highly rigid short conjugated core as well as intermolecular hydrogen bonding of the host molecule minimized the nonradiative rate from triplet state of the guest molecules. Because of the small nonradiative rate, the molecular materials showed triplet lifetimes longer than 1 s at RT. The ultralong-lived RT triplet excitons enabled unique functions such as persistent room-temperature phosphorescence (pRTP) and nonlinear absorption characteristics under incoherent continuous irradiation.

Because pRTP is observed for a few seconds after ceasing excitation and can be detected using conventional small-scale low-cost detectors depending on the autofluorescence of impurities, molecular materials with pRTP are becoming important for use in future ubiquitous optical sensing systems applied in healthcare and security for general consumers. For nonlinear absorption under incoherent continuous irradiation, the absorbance of the materials increased with increasing power of the continuous, incoherent, white-light irradiation from a xenon lamp. The characteristics are useful for broaden applications such as smart windows that save energy at low cost and nonlinear colorants for printing and security applications. 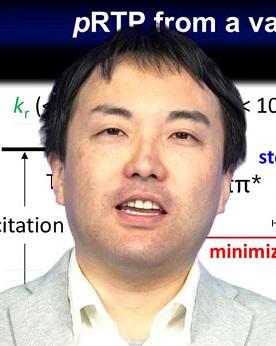