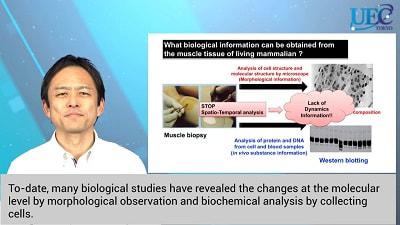 Muscle contraction is controlled by changes in various molecules in the body. In cells, the contraction and relaxation of calcium ions in a short time are regulated. To-date, many biological studies have revealed the changes at the molecular level by morphological observation and biochemical analysis by collecting cells.

However, these methods lack spatial and temporal information in the living body, that is, information on the dynamics in the living body. Yutaka Kano is working on bioimaging research to visualize in vivo molecules in living animal bodies. "To date, many fluorescent proteins and compounds have been made to visualize the inside of living organisms, but we have developed bioimaging technology to introduce these into living organisms," says Kano.

This video includes visualizations of the dynamics of calcium ions in muscle cells and examples of research using this observation method.

"Hence, in this study, we succeeded in visualizing the dynamics of intracellular calcium ion concentration under thermal stimulation in an vivo environment," says Ryo Ikegami a graduate student in the Kano Laboratory.

In this study, the Kano Lab clarified the pathway of calcium ion influx into cells by exercise and the existence of a mechanism that homogenizes the accumulated information on intracellular calcium ion concentration in cells.

The goal is to elucidate physiological systems by applying the latest technology by developing fluorescent molecular probes and optical systems to bioimaging research and visualizing molecular dynamics in vivo.