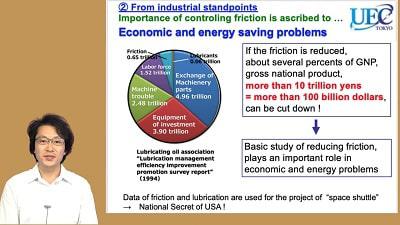 Firstly, the standpoint of economics and energy saving problem. Energy loss of machinery parts due to friction has reached more than about 100 billion dollars or 10 trillion yen per year, so controlling friction is important for industry.

Next, from the perspective of nanotechnology, downsizing objects to nanoscale dramatically increases the effect of friction, which disturbs the smooth motion of objects.

Sasaki and colleagues are devising ways of controlling friction or reducing friction. They have developed a system consisting of fullerene nano-balls sandwiched between graphene nanosheets. In these fullerene bearing systems, frictional forces were successfully reduced to several tens of pico-newtons. So, this system could be applied to super lubricants.

Recently, the team has studied the contact mechanism of silicon and graphite interfaces, which has yielded clues into understanding the formation mechanism of real contact areas.

Furthermore, Sasaki and his colleagues have collaborated with experimentalists to propose new techniques for measuring friction.

Naruo Sasaki
Professor, Graduate School of Informatics and Engineering, The University of Electro-Communications.