Control and applications of 'snake-like' robots 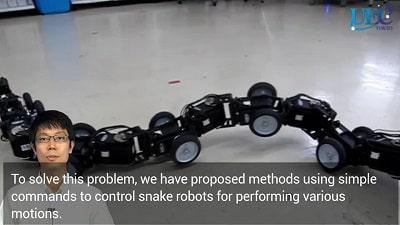 Motoyasu Tanaka is devising high precision methods to control snake-like robots. "Although actual live snakes do not have legs and hands, they can perform a wide variety of motions," says Tanaka. "In addition, their slender bodies enable them to go into narrow spaces where humans cannot enter."

Robots that imitate snakes are effective for inspection of narrow spaces, and search-and-rescue operations at disaster sites. However, it is difficult to control snake robots because they have so many joints. To solve this problem, Tanaka and his group have developed methods using simple commands to control snake robots for performing a wide range of movements.

Specifically, the team aim to accomplish not only motions similar to snakes but also movements exceeding snakes by deriving mathematical models and designing dedicated control systems.

Any part of the body of a snake robot can touch its surrounding terrain. Sophisticated motions were achieved by appropriately designing the parts of a robot's body that touch its surroundings. Movements include, avoiding falling and obstacles as a smart motion, moving on a step, on stairs, into and onto pipes, and on rubble as motion on complicated terrains.

"As applications, we have developed a massage robot that massages a human by wrapping around a human; cleaning robot that not only cleans the ground but also a step; and a rescue snake robot for equipment inspection and disaster response."

"We will continue to advance our academic research aiming at practical applications to contribute to society through snake robots."